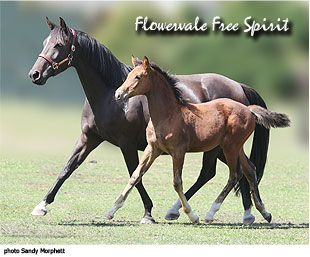 Flowervale Free Spirit [pedigree]
Flowervale Free Spirit, (aka Sprite) Along with her temperament was selected for her beautiful conformation, and extravagant movement. She is by the Westifalien Stallion Freestyle by Florestan, her dam line is Metal by Olympic Ferro.
She Stands at 15.1hh. Her first foal, now a gelding, should remain close to pony height, and her second, a filly, will probably mature at 15.1.
Both foals are a bright Bay with white socks, and inherited the movement of both parents. 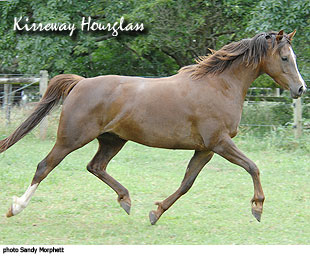 Kirreway Hourglass [pedigree]
Kirreway Hourglass, (aka Reba) was selected for her beautiful head and extravagant hock action, and amazing walk. She stands at approx 14hh. She is by the Anglo stallion, Warrawee Dundee, by Arabian Park Banner, her dam line is by Rotherwood Acrobat and descends from Bwlch Valentino who was one of the most influential of the British Riding Pony Stallions, and who appears in most Riding Pony pedigrees world wide. Her first foal a filly is a very pretty with a lot of chrome. Her second a colt, has an extremely pretty head, with the biggest star in the centre of his forehead and has a huge over track in the walk. Both are chestnut and should mature 14 – 14.1hh 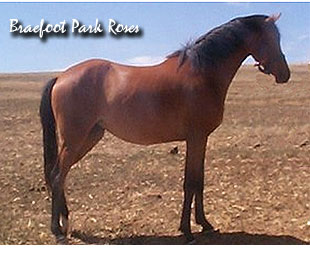 Braefoot Park Roses [pedigree]
Braefoot Park Roses, (aka Roses) Was picked out from a DVD taken of another mare that was offered for sale, I noticed her in the background, showing freedom of movement from the shoulder and lovely swing that I had not seen in a pony mare of her size.
She stands at about 13.1 She is by Langtree Parisienne by Jackets Bluebird (Imp) Her dam line is by Willowcroft Hawfinch by the Laird (Imp) She is of finer bone that the other mares but has a beautiful neck and head set. She is a very smart pony and has produced a colt foal with both the movement of his dam and sire along with an inquisitive nature. He has the makings of being a great character and performance pony. He is chestnut with a another huge white star and large white stocking. 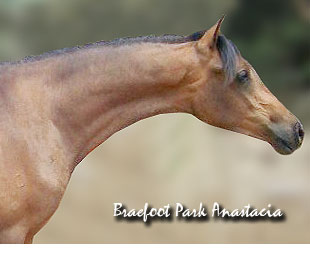 Braefoot Park Anastacia [pedigree]
Braefoot Park Anastacia, (Aka Anna) I was so impressed with Braefoot Park Roses that I wanted to see what other youngstock was available. I purchased Anna as a rising 2 year old. Her sire was standing at the Stud, Corumbene Impressionist / Fairly Rembrandt/Keston Royal Occasion and his dam line Kirreway Zycra/Syon Slpendour/Rotherwood Acrobat. I was very impressed with Impressionist who has the most amazing canter.
Anna’s dam line, Oak Lyn Ky Lacy Rose/Willowcroft Wizard/Willowcroft Vagabond/The Laird. I was very impressed with her pedigree and loved the filly as well. Anna’ has inherited her Sires canter. She has a great temperament and lovely head and front. 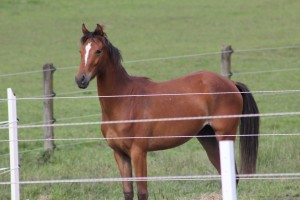